It was November 4, 1922, and another hot day in the Valley of the Kings. It was always hot, and dry, and dusty. But the Valley had yielded countless finds and many treasures, so the heat and aridity did not stop industrious diggers from their pursuits.

The British Egyptologist Howard Carter was just the latest in several generations of archaeologists who had been exploring the Valley in their search for tombs of the great kings of ancient Egypt’s glittering New Kingdom (1550-1069 BCE). He had been digging in Egypt since 1891, but his main pursuit since the days following World War I was the tomb of a little-known pharaoh named Tutankhamun. They had found a handful of his statues, they had seen his name on monuments, but where was he buried?

Carter’s sponsor was the British noble Lord Carnarvon (George Herbert), and it was Carnarvon who was financing Carter’s search for Tutankhamun. But Carnarvon was getting tired of shelling out his fortunes for so little gain, and this dig in November 1922 was in fact Carter’s last chance. It was supposed to have ended already, but Carter had talked Carnarvon into one last season.

So imagine Carter’s amazement on that dusty day when one more sink of the pickaxe struck a stone step under the sand. Clearing the sand away, they found a stairway that descended below ground to a door—and that door still bore the necropolis seals. This tomb promised to be intact.

The discovery of this tomb, designated KV62 according to the ordering system in the Valley, is the stuff of archaeological legend. We needn’t dwell on it here. There is a mountain of literature about the discovery and tomb clearing, and I would refer to the reader to most any book written by a reputable historian or researcher. 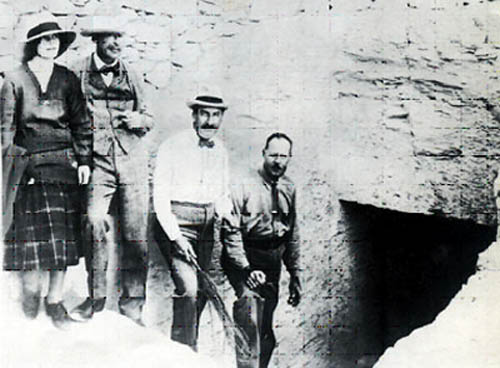 The opened door to the tomb. Carter is second from the right; Carnarvon is to Carter’s right.

Suffice it to say, Carter and his team spent years clearing almost 5,400 artifacts from this small tomb: foodstuffs, furniture, jewelry, shrines, statues, chariots. funerary items, and of course his mummy. It was like a neglected garage that had never been cleaned. It certainly made Carter famous, and although he never dug again, he spent much of the rest of his life on the lecture circuit, recounting his glories to enthralled audiences all over Europe and the United States.

Carter was the right man for the excavation. He was disciplined and meticulous. He and his team labeled, photographed, and plotted every last object retrieved from the tomb. You can see pretty much all of it on the Griffith Institute’s website Anatomy of an Excavation. At the same time, Carter was a challenging man to work with. He didn’t seem to care much for most people and disliked crowds even more so. The media was little more than a nuisance to him, so he was overly selective in whom he allowed to cover his excavation efforts. He certainly did not get along well with the Egyptian government, nor did the government care much for him.

The discovery caused a sensation the world over, so this must not have sat well with Carter in some ways. Every day people stopped by to watch the work, and Carter was often stopping his progress to give impromptu tours to important Europeans on holiday in Egypt. Carter was aware of the excitement his discovery was causing, but he would rather he and his team have been left to their own devices.

So I sometimes wonder what Howard Carter would think of people’s fascination with Tutankhamun today. Working in two different, beautiful ancient Egypt exhibits in Chicago, I am not surprised by how often the subject of King Tut comes up. If the average person thinks of an object that represents the glory and mystery of ancient Egypt, I’m willing to bet the Great Pyramid is what comes to mind. If the average person thinks of an individual, it is likely to be King Tut.

There is an irony to this. To those of us today, Tutankhamun might seem to be the most famous king from ancient Egypt. But in point of fact, Tut was a fairly minor king. He was at the end of a long line of very powerful kings we call the Tuthmosides. To this line belongs some truly powerful kings revered by later generations of Egyptians, such as Tuthmosis I, Tuthmosis III, and Amunhotep III. Also in this line are highly controversial and endlessly fascinating kings like Hatshepsut and Akhenaten, who were erased from history by later kings. And of course later there were powerful kings like Ramesses II, against whom Tutankhamun did not measure up.

Tutankhamun just did not live long enough. He came to throne around 1343 BCE and was only around nine years old. He was dead ten years later. So he simply didn’t have the longevity to accomplish much and make a name for himself. Added to this was his association with the oddball king Akhenaten, the heretic who proscribed the worship of many traditional gods. Later kings wiped out Akhenaten’s memory, and part of that memory was the boy Tutankhamun. This is why so little had been found by archaeologists by Carter’s time.

Nevertheless, today King Tut is one of the most recognizable icons of pharaonic times. The exhibits featuring artifacts from his tomb pack in millions of people the world over. I worked one of them at the Field Museum in 2006. It was at our museum for eight months and brought a million people just through our doors. There are countless books about King Tut, both non-fiction and fiction, there are movies—there is a whole pop-culture craze that swirls around this dead boy king. I have a tissue dispenser in the shape of Tut’s famous death mask: the tissues come out of his nose. 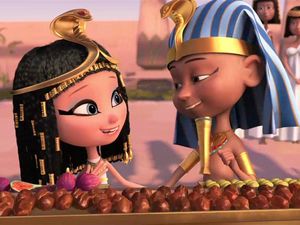 King Tut in the 2014 film Mr. Peabody and Sherman

The 2016 film Mr. Peabody and Sherman even features King Tut. The young heroine Penny seems smitten with the boy king and agrees to marry him, and nothing Peabody and Sherman say can dissuade her. The only thing that changes her mind is when Tut’s advisor tells her that when the king dies, she also must die. I spent a lot of time at the museum after this movie came out, ensuring kids that in real life back then, the queen was not put to death when the king died. I eventually watched the movie myself, and inaccuracies aside, I recommend it for some good laughs. It’s just another part of the Tut phenomenon.

It is simply Tut’s tomb that made him so famous to us. It contained so much gold and bling and riches, so many mysterious and fascinating objects, that even from 1922 it made Tut a household name. A great deal of mystique and mystery have been attached to Tut because of KV62, because until that point in time, every royal tomb that had been excavated, had already been picked clean by raiders millennia ago. Just imagine what might have been inside the tombs of kings like Tuthmosis III, Amunhotep III, and Ramesses II.

A great deal of nonsense has also been attached to King Tut and his tomb. One of the greatest misconceptions is the curse of King Tut, which is more Hollywood than reality. Some of it was caused by the misinterpretation of inscribed artifacts within the tomb, but there simply is no curse inscribed in that tomb.

Back in 2006, when we had the exhibit at the Field Museum, I remember sitting at home one evening and watching a local news affiliate talk about the exhibit. One of the most beautiful objects on display was one of four gold coffinettes that used to hold Tut’s preserved organs: 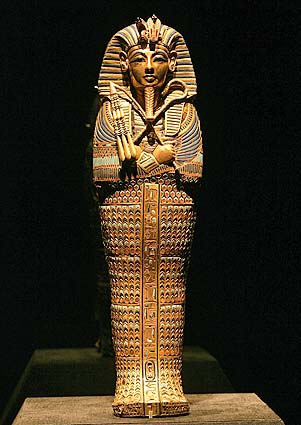 The news anchor showed an image of the coffinette and there was a closeup of hieroglyphs that one could see inside it. The anchor proceeded to explain that those hieroglyphs were a written curse. I very nearly screamed at my TV. Or maybe I did scream. The inscription was not a curse but a ritual prayer. This is a good example of how the modern media tends to distort the facts.

There are all sorts of wild, half-baked fringe ideas about Tut. One of the most popular is that Akhenaten and King Tut were aliens, mostly because the artwork of that period shows their bodies in distorted styles. One of the amuletic devices found on Tut’s mummy was a meteoric dagger, and because meteors come from space, this only encourages some in the fringe to build on the alien scheme.

But as the pages of my humble blog reveal, the fringe has attached itself to ancient Egypt and has no shortage of ways to distort and misrepresent this ancient culture.

As I write this article, there is a new exhibit in the works for Los Angeles: King Tut: Treasures of the Golden Pharaoh. It opens March 2018. As far as I have been able to determine, Los Angeles is the only venue. This exhibit is in preparation for the installation of Tut’s treasures in the new museum Egypt has been building at Giza, which will be opening in the near future (or so they say). Once Tut’s treasures are in place at Giza in the new museum, they might not travel ever again. But we’ve all heard that before.

There is much we still don’t know about King Tut. How he died remains one of the greatest questions today. His mummy has been poked and prodded and studied more than any ancient body from history, literally right down to his DNA, but there is still no universal agreement on cause of death. There is still much we don’t know about the Amarna Period, the time period in Dynasty 18 when Tut lived, mainly due to the later kings so industriously wiping away Akhenaten and Amarna history. We still can’t be absolutely certain of the order of succession between Akhenaten and Tutankhamun. Many questions remain, and that only adds to the mystique.

Tutankhamun is both enigma and rock star. He is one of history’s greatest icons. He will continue to enthrall everyday people, and I will continue to talk about him and answer questions at the museum. I don’t mind in the least. Tut is not one of my own “favorite” pharaohs, but his Amarna Period is endlessly fascinating to study. The romance of King Tut just never seems to get old in popular culture.