Recently for practice I translated an ancient Egyptian stela on display at the Oriental Institute in Chicago, Illinois. It’s a large and colorful stela of an official named Uha, and it’s unusual in that it contains information about his circumcision. I had never translated a monument with this aspect of the ancient culture, so was interested in seeing what it had to say in the original ancient language.

Along the way I spent some time researching the subject and thought it might be worthwhile to compose an article about it. There is a lot of interesting information out there, and I noted that some of it on the internet is misleading or incorrect. I also was reminded of the polarizing effect the subject of circumcision has on modern people, some of whom are not disturbed by it, some of whom find it “barbaric,” and others who regard the practice as a religious or cultural norm.

My article for the most part will be limited to the subject of circumcision as it pertains to ancient Egypt.

The Greek historian Herodotus, writing in the mid fifth century BCE, stated the Egyptians “practise circumcision for the sake of cleanliness, considering it better to be cleanly than comely.” He also wrote: “They [Egyptians] are the only people in the world—they at least, and such as have learnt the practice from them—who use circumcision.”

Were we to take Herodotus at his word, then, we might think circumcision was a universal male practice in ancient Egypt and that the Egyptians invented the practice. But neither case can be stated absolutely. No one knows who first instituted the act of circumcision, and it certainly was not a universal practice among males. Examinations of mummies has shown, however, that circumcision was commonly practiced (Filer 1995: 90) among ancient Egyptian males.

Not even all of the kings appear to have been circumcised, in so far as it is observable on their mummies. Consider Ahmose I (1549-1524 BCE), founder of Dynasty 18 and the New Kingdom:

Mummy of Ahmose I, Dynasty 18

Kings were of course at the peak of social hierarchy, the epitome of manhood, and the divine intermediaries of the gods. It has been speculated that perhaps Ahmose wasn’t circumcised because he was sickly or suffered from hemophilia (Harris & Weeks 1973: 127), but other kings such as Amunhotep I and Amunhotep II also appear not to have been circumcised. The more plausible scenario is that it wasn’t a cultural absolute.

As a museum docent I am sometimes faced with odd or somewhat embarrassing questions. Such questions are often (though not always) posed by children. On display in our Egyptian exhibit at the Field Museum is the unwrapped mummy of a boy who died around 2,500 years ago, at ten to twelve years of age: 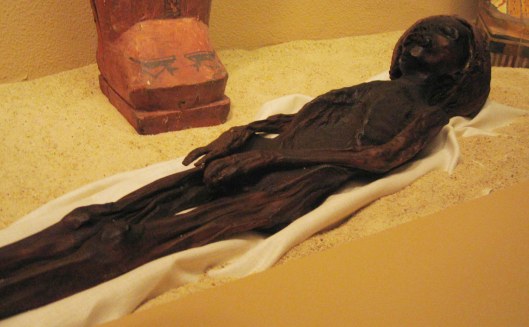 One afternoon I came across a young boy of around seven who was squatting down and studying what he could see below the hands of this mummy. The mummy is so well preserved that his genitals are intact. The young museum visitor looked up at me and asked why this mummified boy was not circumcised. I’ve never paid much attention to what one can see below the mummy’s hands and am not inclined to now, either, but my first thought upon this young boy’s question to me was, Where are this kid’s parents? To cut it short I answered frankly that not everyone was circumcised, and then pretended to be caught up by another group of visitors.

While on the subject of museums, let’s return to the stela of Uha on display at the Oriental Institute: 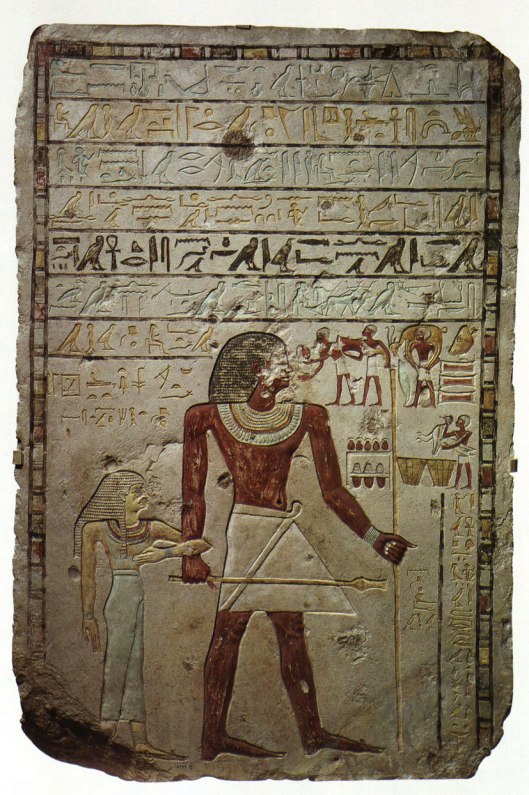 The stela comes from the site of Nag ed-Deir and dates to the First Intermediate Period (c. 2100 BCE). It shows Uha in his kilt and broadcollar and clutching a sekhem-scepter (emblem of power); behind Uha, in diminutive size, stands his wife Henutsen, who affectionately clasps Uha’s hand. Uha carries numerous titles in the lengthy horizontal inscription, among them seal bearer of the king and lector priest. The fourth and fifth registers are specific to his circumcision.

The translation is my own but can be compared against the published translation in the O.I.’s companion book to the exhibit (Teeter 2003: 34): iw sab.k Hna s(w) 120 nn.s xaA nn.s xAw im nn AXa im nnw AXa im (“When I was circumcised, along with 120 men, none therein struck, none therein were struck; none therein scratched, none therein were scratched”). Basically Uha is bragging that neither he nor his male companions struggled or had to be forced in their circumcisions. This is a common theme in the few monuments which mention circumcision, but what makes the stela unusual is that Uha was apparently in the company of 120 other men (Hna s[w] 120). Mass circumcisions are otherwise unattested in ancient Egyptian monuments. If such an occasion did occur, it must have been a highly unpleasant sight to behold.

Incidentally, in my preparations for conducting my translation, I broke one of my own rules and turned to the internet, just to see what was out there. It turns out Uha’s stela is easy to find on the web, and there are numerous translations. On several I came across mention that there were “120 men and 120 women” on the day of the mass circumcision. This is incorrect. While the stela clearly mentions the figure of 120 men, no women are mentioned in the group. As noted earlier, evidence is lacking that females underwent circumcision in ancient Egypt.

Considering the impressive length of pharaonic history and the practically countless inscribed monuments, circumcision is not well represented historically in ancient Egypt. There are only two monuments which specifically depict the act of circumcision: in the tomb of Ankhmahor at Saqqara and in the temple precinct of Mut at Karnak (Filer 1995: 90). Other monuments such as Uha’s mention circumcision but do not depict it. Circumcision is not mentioned in the extant medical papyri (ibid).

The depiction in Ankhmahor’s tomb is worth reviewing. Dating to Dynasty 6 and specifically to the reign of King Teti (2355-2343 BCE), it is the oldest extant depiction of the act of circumcision from ancient Egypt. Here is a line-art version of the depiction, which appears on the east thickness of a doorway in the tomb:

Ankhmahor was a high-ranking official whose tomb was small but beautifully decorated with relief carvings. It is found in the pyramid complex of Teti. His titles included overseer of all the king’s works, overseer of the two treasuries, priest of Maat, and lector priest (Kanawati, N. & A. Hassan 1997: 11-12).

The above scene depicts two men being circumcised. The scene has been interpreted in different ways but the nude male at right is surmounted by an inscription in which he says: sin wnnt r mnx (“Sever, indeed, thoroughly”). The man kneeling before him says: iw(.i) r irt r nDm (“I will proceed carefully”).

All our male readers are probably squirming by now. At left is one man restraining the nude male there, while another kneels before him to preform the procedure. The glyphs in front of the kneeling man identify him as a Hm-kA, mortuary priest. In the inscription he is telling the man doing the restraining: nDr sw m rdi dbA.f (“Hold him fast. Do not let him faint”). The restrainer says: iri.i r Hst.k (“I will do as you wish”).

The nude male at left is not given lines. Presumably he is doing everything he can not to pass out. This is understandable.

As I mentioned, the depiction has been interpreted in different ways. Below the elbows of the restrained male at left is the word sb, which is typically translated as “circumcise.” The Egyptologist Ann Macy Roth has plausibly argued that this word should act together with Hm-kA to form the sentence sbt Hm-kA (“Circumcising the mortuary priest”), which makes the restrained nude male at left the mortuary priest (Nunn 2002: 170-171).

Roth’s proposal makes sense because it’s otherwise confusing why a mortuary priest should be performing circumcisions. The scene as a whole is somewhat odd in its context because, while the tomb of Ankhmahor shows other scenes involving medical care, the circumcision depiction is isolated on a door thickness and does not even include Ankhmahor. It’s been argued that one or both of the nude males might be sons of Ankhmahor, who are depicted elsewhere in the tomb.

So it remains unclear under what circumstances a male in ancient Egypt would be circumcised. While it seems clear Herodotus’ accounts of the practice are exaggerated, the fact is many men were circumcised (again, evidently in late puberty). It might come down to how some people in ancient Egypt viewed purity rites. To the ancient Egyptians purity was not so much a state of mind as it was a physical phenomenon (Teeter 2011: 32). There are scattered references that circumcision was an act of physical purity (ibid), and I personally have always wondered if it was a preference or perhaps an obligation among men in certain priestly classes. Recall that in both our examples here—Uha and Ankmahor—these men carried priestly titles.

Remember that in both ancient times and modern, circumcision has been a fixed cultural feature and an act of initiation into manhood. While some modern people find the practice “barbaric,” it is not one’s place to force his or her attitudes into someone else’s cultural or religious beliefs.

Thanks for reading. As always, I welcome comments.

Kanawati, N. and A. Hassan. The Teti Cemetery at Saqqara: Volume II: The Tomb of Ankhmahor. 1997.

Teeter, Emily: Ancient Egypt: Treasures from the Collection of the Oriental Institute University of Chicago. 2003.

—Religion and Ritual in Ancient Egypt. 2011.

Follow Ancient Near East: Just the Facts on WordPress.com